Jack’s work not taken for granted 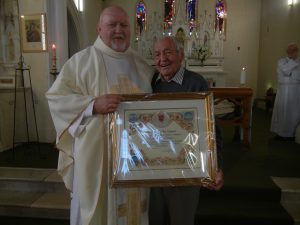 St Joseph’s parish pastoral council applied to the Apostolic Nuncio to request one from Pope Francis.

Parish priest Fr Tom Thornton made the presentation and thanked Mr Grant, who turned 97 on March 31, for his outstanding contribution over many years.

The Grants moved from Moyne Farm at Warraderry to Grenfell in 1994.

Parish pastoral council president Liz Carroll congratulated Mr Grant and thanked those who had helped to acquire it.

Apologies were received from Mr and Mrs Grant’s daughters Patricia (New Zealand) and Carmel (Wagga Wagga) and son Fr Paul (USA), as well as son John and his wife Sharon.