THE challenges of marriage and family life in today’s world were eagerly discussed by participants at the Monaro Deanery Assembly held at the Uniting Church Hall in Cooma on April 16.

About 50 Catholics representing parishes in Jindabyne, Nimmitabel, Bombala, and Cooma attended the first of the five regional deanery assemblies planned for 2016.

While the hot-button issues often highlighted by the media – the Church’s position on marriage and divorced and remarried couples – were a source of lively discussion, other topics, such as living with family members struggling with mental illness, were also raised.

During his keynote address, Archbishop Christopher Prowse stressed the importance of demonstrating the joys of marriage and family life to the wider community.

“Using a football image, are we boundary umpires or the coach?” he asked.

“The boundary umpire’s job is to say whether the ball’s in or out… so do we say that’s right, that’s wrong, that’s regular, that’s irregular, that’s moral, that’s immoral – do we end up spending all our time doing that?

“Or are we the coach? Encouraging people to grow in the game, letting them know what the game is about.” 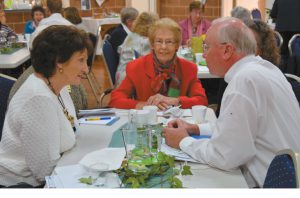 Cooma parish priest Fr Mick MacAndrew speaks with participants of the Monaro Deanery Assembly on April 16. The event was the first of five similar meetings planned for 2016 in each Deanery. PHOTO: MATTHEW BIDDLE

Married couples in today’s world are “like a living Gospel” the Archbishop added, providing others with a wonderful example of true love.

“Marriage is the best arrangement that humanity’s ever come up with,” he said. “It’s not just a Catholic ideal, it’s a human ideal.”

The ideal of marriage needs to be fully understood before we can discuss the challenges to marriage, Archbishop Christopher said.

“What can we do in the Archdiocese of Canberra and Goulburn a little bit more effectively, pastorally and practically, to assist people on this accompaniment, this healing and this conversion? How can we channel our resources to the vulnerable ones in marriage and family life?”

Following the Archbishop’s address, participants discussed the topics raised with one another, before several individuals from the region presented short testimonies on mercy and forgiveness in their lives.

Later in the day, participants formed groups and examined what actions can be taken in parishes to make them places of mercy and to address the issues raised in discussions.

In his final remarks, Archbishop Christopher reminded those present that mercy involves two elements – forgiveness and a call to conversion.

“Jesus always called people to conversion, it wasn’t just total acceptance,” he said. “God kisses you first, then he asks you to do something better, not the other way around. Let’s not forget that second part.”

The Northern Deanery Assembly will be held on April 30.