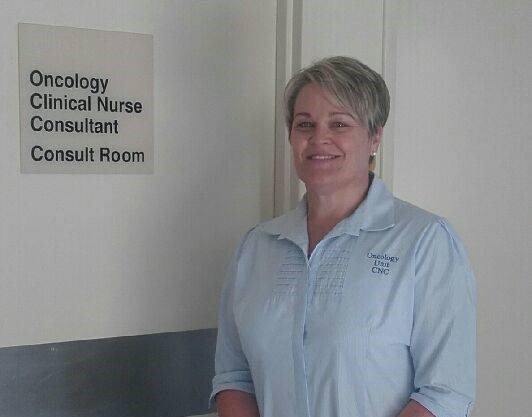 LOUISE Mugridge of Young now has three further initials behind her name after she was named on the Queen’s Birthday honour roll recently.
Mrs Mugridge is a dedicated and hard-working Clinical Nurse Consultant in the Oncology Unit at the Young District Hospital.
It was for her service and dedication to her profession and to the community of Young that Mrs Mugridge was awarded the Order of Australia Medal on Monday.
“I got a bit of a shock,” Mrs Mugridge said.
According to Mrs Mugridge she had received a letter ten days prior notifying her of her award.
“To be honest it’s very humbling, it’s such a team effort,” Mrs Mugridge said in regards to the Oncology Unit, “It’s about the service we provide, we’re a team and there’s thousands of oncology nurses from around Australia.
“I’m overwhelmed by the messages of support by my family, friends and the community.
“I am so mindful and grateful of the beautiful team of nurses and doctors I have worked with over the 26 years of oncology nursing who contribute every day to helping improve outcomes for the patients in our care.
“Thank you to Joy Cameron and your secret team of supporters in gaining this award, you are very special people.”
Mrs Mugridge was applauded and congratulated by her colleagues at Young District Hospital and the MLHD for the prestigious and well deserved honor.
OMG OAM: Louise Mugridge of Young was the recipient of the Order of Australia Medal on Monday for her dedication as an Oncology Clinical Nurse.
“Under Louise’s leadership, the Young Oncology Unit has increased the number of patients receiving care by more than 200 percent,” Murrumbidgee Local Health District Chief Executive Jill Ludford said.
“Louise has also increased services to incorporate therapies for non-malignant patients, including antibodies treatment and administration of blood products.”
According to Ms Ludford Mrs Mugridge was instrumental in establishing patient support groups within the Young area as well as ensuring the groups are self-sustaining. Ms Ludford applauded Mrs Mugridge for her role in the development of a cancer services directory for the towns across the Southern NSW region saying the directory is a great initiative for the community.
“We are very happy to congratulate Louise on her award and we thank her for her contribution to the health of the Murrumbidgee communities,” Ms Ludford said.
– This story first appeared on the Young Witness website on June 15, 2017.