A lover of learning moves on 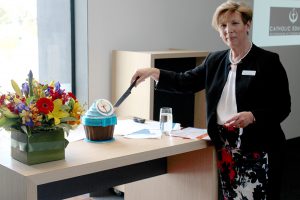 Moira Najdecki isn’t sure how to describe her decision to finish up as director of Catholic Education in the Archdiocese by the end of this year.

“I don’t know what the appropriate word is because if you just say you’re resigning then it sounds like you’re going somewhere else,” she says.

It’s not exactly retirement, either. “Moving on?” she suggests.

And she does feel it is time to move on. As much as she has enjoyed her busy and demanding role, she always thought 10 years would be enough.

“I think it needs new eyes and a freshness in the way you do things,” she says.

“It’s very cyclical. The same things come around year after year and you’ve always got to be pushing the envelope a bit as to what needs to happen.”

Mrs Najdecki didn’t know what she was getting herself into a decade ago when she transitioned from heading up secondary schools (as principal at St Francis Xavier College, where she oversaw the inclusion of Years 11 and 12, and then St Mary MacKillop College) to heading up the administration of what has grown to be 56 Catholic schools in the Archdiocese.

That was probably a good thing, she says, but it turned out to be the right move.

“I’ve always liked the staffing stuff, the relationships with people, the planning, all the strategic stuff,” she says.

She has also enjoyed working across the ACT-NSW border, which has given her two very different education systems to wrangle.

While stressing that she can’t take individual credit for any of the administration’s achievements during her reign, Mrs Najdecki has a list of things she can be proud of, many of them achieved after long battles and with much grit and persistence.

The facilities all the schools gained out of the Building the Education Revolution, the establishment of St John Paul II College in Gungahlin and the growth of the soon to be eight Catholic early learning centres are high on her list.

Her “labour of love” was a history of the Canberra’s Catholic schools, called Ringing in the Years, which she enticed her sister-in-law Jenny Jeffery to compile for the 2013 centenary under the misapprehension it would be a straightforward job.

Of course it wasn’t. But Mrs Najdecki felt it was important to record this history and would like to do the same for the Archdiocese’s NSW schools.

She is now finalising a pictorial dedication to the Good Sams’ school history, along with a display dedicated to the Josephite and Mercy sisters, on the walls of what were the Good Sams’ convent and school on the Catholic Education site in Manuka.

“You can’t lose your story,” Mrs Najdecki says. “You really need to know whose shoulders you walk on.”

She says the challenge ahead, meanwhile, is government funding of schools.  Her fear is the flawed view of Canberra as a wealthy society will lead to funding decisions that will threaten the Archdiocese’s ability to keep many its schools out of the “elite” category.

The issue of getting Catholic schools into the new development areas will also be ongoing.

Mrs Najdecki, who was brought up with her six brothers and sisters, parents and grandmother in an “11-square” government house in Narrabundah and was educated at St Benedict’s primary and St Clare’s College, won’t lose touch with the Catholic education scene.

She is a member of the Australian Catholic University senate and ACT chapter, and one of her four children, Lisa Harris, is an assistant principal at St Vincent’s primary.

She will also have husband Steve, a garden in Deakin and five grandchildren to keep her busy.

Mrs Najdecki leaves the school system, after 30 years of teaching and a decade in administration, with senior figures singing her praises.

Among them is Archbishop Christopher Prowse, who,  in a letter to the Archdiocese, described her as a great role model.

“Her colleagues throughout Australia speak of her as a commensurate professional and woman of great wisdom and integrity.  But there is a deeper appreciation required, even beyond this.  She is a wonderfully committed Catholic woman who has expressed her love of God and the Church in her teaching profession,” he said.

Angus Tulley, who succeeded Mrs Najdecki as principal of St Francis Xavier College, has known and worked with her for 20 years.

“Moira has always impressed me as a woman of deep faith who loves learning and the opportunity to bring others on an educational journey,” he said.

“Moira is a leader among leaders and she is passionate about schools and, in particular, Catholic schools. Moira remembers fine details and she remembers people.”

Just as people will no doubt remember her.

Mrs Najdecki was officially farewelled at a late-afternoon function at the Catholic Education offices in Manuka on November 18.