Marist boys learn from the best in the UK

TWENTY Marist College students from Years 10, 11 and 12, along with three staff members and three parents, took part in the school’s UK Football (soccer) Tour from September 25 to October 11.

The tour, which takes place every three or four years, was an eye-opener for most members of the group, according to Year 12 student David Mennie.

“It was good for the boys to experience the culture of their football,” he said.

“Over here there’s not much of a football following, but over there it’s their life, they live it and breathe it. Everything and everywhere is football. No one cares about anything else over there.”

David said while the team was outplayed on each occasion, it was a great learning experience. 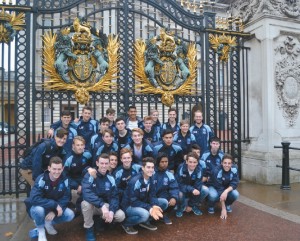 “It was good to see how they play football there compared to over here,” he said. “In our age group, there’s 10 million boys in the UK who play football, of which 9,999,900 are a lot better than we are.

“They had more enhanced tactics, and were very smart about how they played. It was very different to how we play here. They’ve got the knowledge and the wisdom when it comes to football, whereas we’ve just got the leg power.”

The group also attended several English Premier League matches, including a match between Manchester City and West Ham United, where the crowd exceeded 70,000.

“We also had a training session at West Bromwich and they taught us a lot of new, different things to what we’re normally taught… a new way to think about the football, to think laterally,” David said.

As part of the tour, the group also visited several noteworthy sites such as Buckingham Palace and Edinburgh Castle.