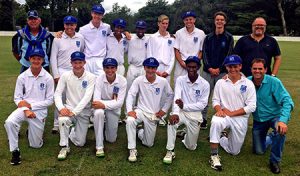 Pranesh De Silva was in sublime touch scoring 107, his second ton of the summer after he belted 120 against Daramalan College.

Led by co-coaches Gary Goodman and Brett Feebody as well as captain Nikesh Joseph, the Blue Caps went through the season undefeated in the ASC Twenty20, one-day and two-day competitions claiming 15 straight wins on the way to the overall premiership for the seventh consecutive time.

The team also put up a valiant effort in the 44th annual Marist Cricket Carnival at Lismore winning three out of five matches and coming fourth. They were unable to emulate their 2014-15 success when they won the carnival in Brisbane.

In that match, the Canberra Marist connection ripped through the Joeys batting line-up skittling them for 40 with Tom Iles and Nikesh Joseph doing most of the damage, taking three wickets apiece.

The top order made light work of the chase and at this point the team from Canberra was expected to seriously challenge for the title.

Although they put up a good fight in the final two games, the ACT boys but were not able to get the job done against tough opposition in Trinity College Lismore and St Joseph’s Hunters Hill who turned the tables in the final game.

Jordie Misic and Lewis Evans were selected in the Australian Marist Combined team, Misic for his dogged batting performances and Evans for backing up with some outstanding bowling.

“In the past seven seasons, the Marist First X1 has lost only 12 games from some 140 matches played at ASC and Marists carnivals,” co-coach Mr Goodman said.

“The last five ASC seasons, Marist First X1 has been undefeated in all matches – Twenty20, one-day and two-day matches.”

He puts the success down to the culture.

“This outstanding success over many years is based on a strong Marist ethos towards excellence in training standards, professional attitude to match play and respect for the game, opposition and especially team mates.”

Myburgh was named Senior Cricketer of the Year, his standout game coming against St Edmund’s College when he made a well-compiled 140.

Other performances of note came from Evans (5 for 6 against Beenleigh), Moffatt (100 against Daramalan) and Misic (6/49 and 102 against Canberra Grammar). De Silva claimed 5 for 6 against St Edmunds to go with his two centuries.