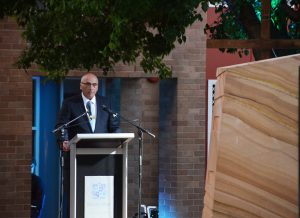 Marist College Canberra has taken a step to recognise the child sexual abuse, which occurred at the college over three decades by holding a Liturgy of Lament, making a public apology and taking the pledge “Never Again”.

A gathering of more than 200 people attended a candlelit evening liturgy and ceremony in the school quadrangle on November 10, where a ‘liturgy of lament’ and the unveiling of a remembrance monument took place for those who have been affected.

The plaque on the monument quotes psalm 119:105, which reads: “Your word is a lamp to my feet and a light for my path.”

Fr Peter Day led the liturgy of lament, which was largely reflective and rich in symbolism.

It was held on sunset with bells ringing, with current students in school blazers holding lanterns throughout the ceremony.

Like many others at the liturgy, Fr Day was moved by what took place on the evening.

“I had the humbling and distressing privilege of leading the liturgy of lament,” he said.

“It was a beautiful, moving and healing ceremony, while also deeply saddening – it had a funeral feel to it.”

The college’s initiative drew much publicity through media outlets.

He said the issue had not been dealt with properly in the past and that he was taking responsibility as the “face of Marist”.

“There is a massive sense of despair and anger that these things took place in a school,” he said.

“We are determined not to go back there.”

He said enrolments at the school remained strong.

“We are providing a good education,” he said.

“People in Canberra are smart. They are discerning about the type of education they choose for their boys.

“Everything we stand for today, is different to what it was then.

“The types of actions we took last night were the first steps with good intentions in the right direction.”

To listen to the full radio interview with Richard Sidorko go to http://www.abc.net.au/radio/canberra/programs/mornings/marist-college-canberra-head-master-richard-sidorko/8016722