WALKING 4,500km across Australia while bouncing an AFL football the entire way is no mean feat, yet Canberra man Matt Napier is aiming to go one better in 2016.

In June, the 39-year-old will set off on a 2,250km walk through Africa while kicking a soccer ball, in an effort to again raise awareness about global poverty.

The three-month journey will commence in Walvis Bay, Namibia, and Mr Napier plans to pass through the Kalahari Desert, Botswana, and the northern part of South Africa, before finishing in Maputo, Mozambique.

While he won’t know the language, Mr Napier said he was confident the soccer ball would help him connect with people along the way, particularly children.
“I have been to southern Africa before and they are such a generous and loving race of people,” he said. “I won’t be able to speak their language but we will be able to share the language of soccer. Sport is a very powerful tool bringing people together from all walks of life on a level playing field.”

During his five-month walk across Australia in 2013, Mr Napier endured temperatures ranging from -8 to 45 degrees and went through six footballs and five pairs of shoes. But he said it was worth the effort. 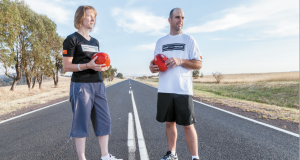 South Woden parishioners Matt and Wendy Napier have embarked on several fundraising ventures in the past few years, in an effort to raise awareness of global poverty. Matt’s next mission is to walk 2,250km through Africa in June, kicking a soccer ball the whole way. Photo:SUPPLIED

“The most rewarding part was being able to get the message about poverty out to so many people,” he explained.

“I spoke with thousands of school children and members of Parliament on how we all need to become better global citizens, by that I mean doing our fair share in helping the world’s poor break the poverty cycle.”
Mr Napier will be living under the poverty line during his journey across Africa, spending no more than $1.50 each day on food to highlight how some 1.3 billion people survive around the world.

“We will also be doing a documentary to highlight the fantastic work that organisations such as Oxfam, Care, Caritas and Fred Hollows have done over the last 25 years in halving extreme poverty and the reasons why some of the world’s poor still can’t break the poverty cycle,” he said.

An active member of Mary Help of Christians Parish in South Woden, Mr Napier said the words of Scripture provide a strong indication of our duty towards the poor.

“The Catholic Church should be in solidarity with the poor,” he said. “We as Catholics need to set an example for the rest of the world to follow, particularly when it comes to generosity to help the disadvantaged.

“Now is the time for the Catholic Church to stand up and lead the way when it comes to ending extreme poverty and show the world what being a Catholic is all about.”

At a local level, Mr Napier and his wife Wendy run charity garage sales in Canberra once a month, where they sell unwanted goods donated by members of the local community.

The funds raised go towards a variety of projects in developing countries, such as maternal health care in Uganda, sustainable food sourcing for orphans in Zambia and a community bank in Malawi.

For more information about Mr Napier’s journey or to follow his progress, visit: www.walktoabetterworld.com.