ABOUT 40 members of the Legion of Mary in the Archdiocese gathered for the annual consecration Mass on April 2 at St Joseph’s Church in O’Connor.

The group were joined by Fr Bill Kennedy and Fr Laurie Foote OP, who led the customary Legion prayers before celebrating Mass for the occasion.

The prayers began with the Rosary, followed by a short address by Fr Bill on the history and development of the Legion of Mary. 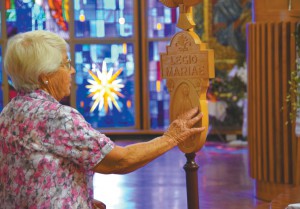 A member of the Legion of Mary in the Archdiocese places her hand on the Vexillum while reciting part of the consecration to Our Lady on April 2. PHOTO: MATTHEW BIDDLE

He spoke about the life of Frank Duff, founder of the Legion of Mary, who was first an active member of the St Vincent de Paul Society.

“When he had that first meeting in Dublin, it was called ‘Our Lady’s Confraternity of Mercy’, and so for many years it was known as that,” Fr Bill explained.

“Later, Frank had the idea of a legion, like the Roman legion of soldiers going out on behalf of the Emperor.

“But this is Mary’s army set in battle array.”

The Legion of Mary also adapted some of the characteristics of the Roman legion, Fr Bill said.

“The Roman soldiers carried their banner with the Roman eagle at the top,” he said. “Frank replaced that with the Holy Spirit, the dove.”

In adapting another article used in the Roman Legion of old, the Legion of Mary applies the word ‘tessera’ to the three-panelled leaflet containing the prayers of the Legion.

After Fr Bill’s address, members processed to the Vexillum, placed one hand upon it, and recited the words from the consecration to Our Lady: “I am all yours, my Queen, my Mother, and all that I have is yours”.

The group then recited the full consecration prayer, as well as the Catena Legionis before Mass.

The Legion of Mary is an association of Catholics who serve the Church on a voluntary basis by performing some active work each week such as visiting hospitals, nursing homes and prisons and providing instruction in the faith to both children and adults.

It was founded in Ireland in 1921, and draws its inspiration from the book, True Devotion to Mary, written by St Louis de Montfort.

There are more than 10 million active and auxiliary members of the Legion of Mary, making it the largest apostolic organisation of lay people in the Church.