MGL see ‘many signs of hope’ 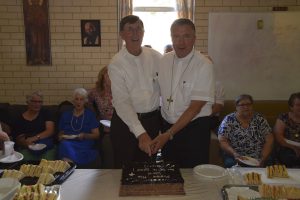 THE Missionaries of God’s Love have strengthened their foundations in Canberra by opening a new formation house in Garran.

The formation house has nine rooms on two levels to accommodate the community’s novices.

Archbishop Christopher Prowse celebrated Mass in the chapel before blessing the new building.

He spoke about his long association with MGL Moderator Fr Ken Barker and wished the community well in bringing through more religious vocations.

“While these are difficult times in the Church there are many signs of hope,” Fr Barker said.

“It (the generosity of the people) has shown me that the Catholic people highly value the formation of good and holy priests.”

Fr Barker thanked many donors who had contributed from all over Australia.

Anyone who would like to make a contribution to the MGL seminary appeal may do so by contacting the community on (02) 6281 0132.