The New Evangelisation and our parishes 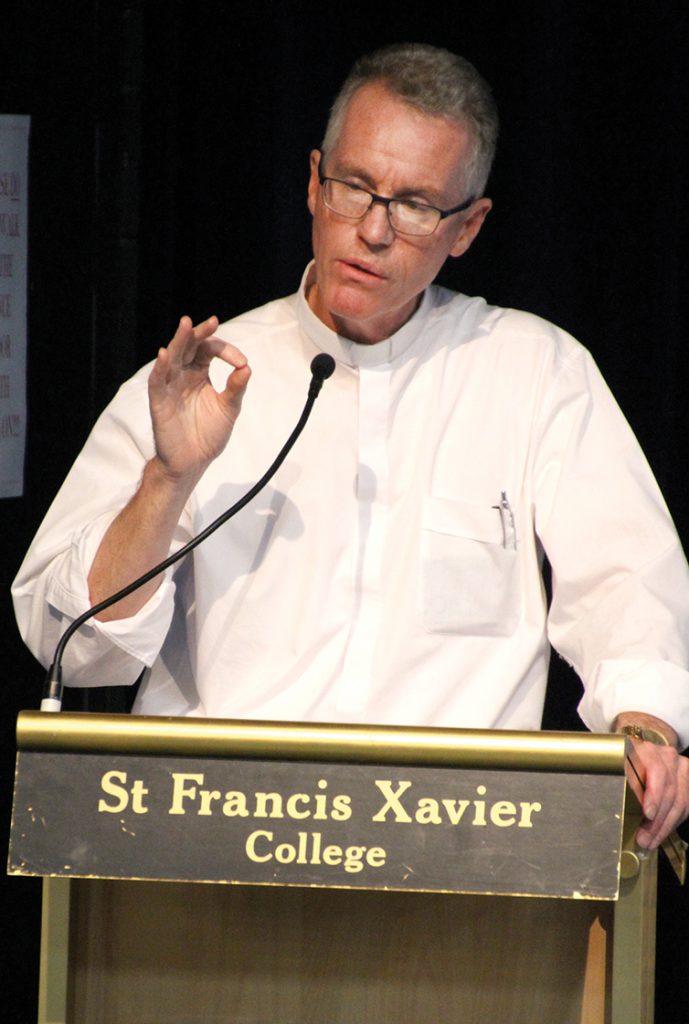 The priority of working together in our parishes will be fundamental to the new evangelisation, Vicar General Fr Tony Percy says in a thought-provoking paper delivered to a meeting of representatives of Belconnen parishes.

Love of one’s parish is a deep Catholic instinct. Being baptised, confessing one’s sins, praying and participating at Sunday Mass, attending the parish school, forming intimate friendships with those who share the same faith, knowing and loving the parish priest, active involvement in parish activities of one sort or another, getting married and baptising one’s children at the same font as other family members were, are deeply touching realities.

And yet, such a picture of personal, social and ecclesial trust and demographic stability is no longer the norm. Society has changed rapidly since the end of World War 2 through advancement in technology, the mobility of people, changes in attitudes to sexuality and thus marriage, the advent of the cultural revolution with its effect on our attitudes to authority and family stability, the steady decline in religious practice, huge demographic movements from country to city, recourse to violence and drugs, etc.

The decline in religious practice has been substantial in most Western countries. In our Archdiocese, despite a steady increase in population in Canberra and the surrounding region, we have witnessed a dramatic decline. In 1994 Mass numbers for the Canberra parishes were 16,012. By 2015 the number has declined to 9653. This represents a 40% fall in Mass practice. In country parishes, the decline has been similar, if not greater. Attention has often been focused on the decline in priestly and religious vocations, but these figures indicate a deeper ecclesial and cultural challenge and opportunity.

The Archdiocese has attempted to respond to these pastoral problems in a number of ways, through Archdiocesan Synods and Assemblies and through various studies and reports (such as the Pastoral Ministry Task Force Report 1995 and Regional Groupings 1999 and a 2006 Belconnen Regional Parishes and the further 2014 Report on the Parishes of Kaleen and Evatt).

Where are we now?
The Diocese of Goulburn was established in 1862. With the establishment of Canberra as the nation’s capital, it became the Archdiocese of Canberra and Goulburn in 1948. There are 55 parishes, comprising 36 in the country and 19 in Canberra. The Archdiocese covers an area of some 88,000km. The Archdiocese is blessed to have 44 diocesan priests, seven religious priests and nine permanent deacons.

There are four hospitals and 10 nursing and convalescence homes. Many of our people are serving in education, with 1700 teachers reaching 21,000 school children in 56 Catholic schools. In non-government schools, 200 catechists are reaching over 2200 students.

Where are we going?
St Luke recounts the call of the twelve apostles: “And he called the twelve together and gave them power and authority over all demons and to cure diseases, and he sent them out to proclaim the kingdom of God and to heal” (Luke 9). He also recounts the call of the seventy-two disciples. He “sent them on ahead of him, two by two, into every town and place where he himself was about to go” (Luke 10).

It is clear that all of us are disciples through our baptism and it is a calling to reach out to others with the good news of salvation. Popes of recent times have called this the “new evangelisation” where bishop, priest and people share co-responsibility.

Praying and working together is indispensable for this divine task in a new social, cultural and ecclesial context. There is strength and encouragement in numbers and in unity. This is particularly true in our parishes, which despite the manifold changes that have taken place in our society, are still the best means we have of spreading the Word of God in our society. How we organise ourselves in the future is an important pastoral priority.

Canberra and Queanbeyan
It is estimated that Australia’s population will be close to 50 million people by 2050, while Canberra’s population is expected to rise to around 700,000 (Queanbeyan 80,000), making it the seventh largest population area in Australia. Some country areas will obviously benefit from such growth, while others are expected to continue to decline.

One possible scenario for the Canberra-Queanbeyan area is to have 15 parishes with around 50,000 people (approx. 12,500 Catholics). Modern means of transport encourage such a configuration. Technology, too, will aid with parish administrative needs. At the moment we have two parishes of this size – South Tuggeranong and Gungahlin – which operate well, both administratively and pastorally.

Country Parishes
The picture for the country areas is less clear. Some that are closer to Canberra and Queanbeyan should benefit through population growth. Others will, it seems, continue to decline in population.

What do we want to do?
Our mission and pastoral aim is clear. We want to spread the “good news” in our new social, cultural and ecclesial context. Announcing the Word of God is our primary pastoral task, while celebrating the mysteries is our principal pastoral task.

Proclaiming the Word of God
Numerous surveys and studies indicate three essential ingredients for the proclamation of the Word of God in parishes:
Good community, good music, good preaching.
Consolidation of personnel, financial and property resources will be necessary to help facilitate the development of our parishes. In addition, if we want to reach out with the Word of God to “the many,” then we will need to focus on fostering a deeper communion with our Catholic Schools and CCD programs.

The Eucharist
Since the Eucharist is the “source and summit” of Christian life, Sunday Mass is an obvious pastoral priority. The Eucharistic gathering is the pre-eminent place of the proclamation of the Word. This Word then becomes flesh in the gift of Christ’s Body and Blood. Participation in the Lord’s passion, death and resurrection and the reception of his Body and Blood, therefore, are central to Catholic belief and practice.

Living as we are, in a time of change and discouragement, gathering together as the Lord’s Body for Sunday Mass serves also to provide encouragement and hope to the faithful. Perhaps in former times this aspect of the Eucharist has been underplayed, but it now needs more emphasis given our new context.

Let us consider how to stir up one another to love and good works, not neglecting to meet together, as is the habit of some, but encouraging one another… (Hebrews 10:25).

It is from the Eucharistic gathering, then, that all of us gain strength to live our faith in our homes, places of work and in the wider society in which we live. The priority of working together in our parishes will be fundamental to the new evangelisation.

This applies to priests as well, who, like the lay faithful, need the encouragement of priestly presence.

This might mean that some priests will live together, while travelling out to communities to meet pastoral needs of the faithful. In this we follow the Lord’s command to go “two by two.”

Dialogue and consultation with local parish communities is a pastoral priority, as is the participation of local communities. Doing this, in and with a deep spirit of communion, is important since this is the Church’s deepest identity. She is a communion of men and women whose source is the Communion that is Father, Son and Holy Spirit.