In taking up the role of Canberra’s new Korean community chaplain, Fr Thomas Jin, 35, hopes to build on the foundation of his predecessor Fr Paul Yo. 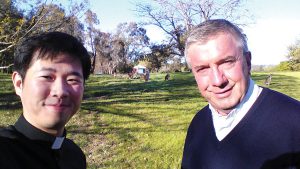 Fr Jin has been appointed assistant priest of St Vincent de Paul Parish Aranda, in addition to his chaplaincy role – something which he is very much looking forward to.

“The Canberra Korean Catholic Community is a young, vibrant community where many varieties of Korean migrants come together,” he said.

“They (Koreans) come to Canberra for all sorts of reasons such as marriage, migration, studies, new employment and travelling and the Aranda church is a valuable nest for all of them to unite in the Catholic faith.”

“Australia is a multicultural nation that is based on various cultural backgrounds,” he said.

“It is fascinating to see the Australian Catholic Church welcoming the Korean community for sharing the same faith, and I find joy in sharing that acceptance with everyone who is living in this country.” And there is no time limit on his stay in the ACT.

“It is all dependent on Archbishop Christopher Prowse, Bishop Lazzaro (his bishop in South Korea) and the Lord who organises everything,” he said.

Primarily he wanted to be a priest and a missionary priest at that.

His family came to the Catholic faith when he was a boy and he credits his time spent as an altar boy as well as the example of the assistant priest at his local parish, for giving him a great love for the priesthood.

“Our assistant priest was a very young, humourous man who loved and who got along with everyone regardless of their age, gender and race,” Fr Jin said. “I wanted to be like him.”

A chance meeting with Pope Francis in 2014 confirmed Fr Jin’s conviction that he was open to serving the wider Church.

Fr Jin is the youngest of four children. His three sisters are married with one child each. His father runs a small judicial office and his mother is a housewife.

Like many Korean Catholic families, he has a strong devotion to St Andrew Kim Taegon, the first Korean priest, and the other 102 martyrs. He was ordained in 2009 and later spent two years serving as a missionary to the Korean community in Sao Paulo, Brazil.

Fr Jin is a keen badminton player and will “have a go at anything which raises a sweat”.