‘A new springtime’ blooms 500 years on 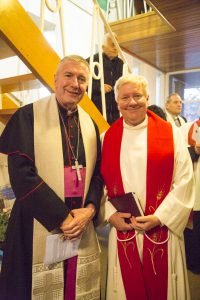 CATHOLICS and Protestants in the ACT have come together to commemorate the 500th anniversary since Church reformer Martin Luther nailed his 95 theses to the door of All Saints Church, Wittenberg, Germany.

A joint liturgy principally conducted by Pastor Gabor Szabo and Archbishop Christopher Prowse at St Peter’s Lutheran Church, Reid, was the main focus of the commemoration.

Pastor Szabo welcomed the congregation, which included local Christian leaders, saying: “Lutherans and Catholics have been on a journey from conflict to communion.

“With joy, we have come to recognize that what unites us is far greater than what divides us.”

Archbishop Prowse, who is Chairman of the Australian Bishops Commission for Ecumenism and Inter-religious Relations, responded: “So it is possible for us to gather. We come with different thoughts and feelings of thanksgiving and lament, joy and repentance, joy in the Gospel and sorrow for division.

“We gather to commemorate in remembrance, in thanksgiving and confession, and in common witness and commitment.”

In their addresses, both Pastor Szabo and Archbishop Prowse acknowledged mistakes as well as the pain and suffering of the past; and vowed to continue walking side-by-side in the future.

In his talk, Pastor Szabo said Luther, a former Augustinian monk, had no intention to start a new Church and that the reformer wanted to restore the medieval Church.

He also talked about the Great Schism of the Eastern and Western Churches in 1054.

“These two great schisms were not just coming out of the blue,” he said.

“They were preceded by centuries of theological wrangling and power struggles which resulted in mutual condemnations and excommunications [and] this was not what Jesus prayed for at the Last Supper.

“Luther’s protest was theological in nature; he couldn’t care less about politics.”

He reminded Christians to turn to Scripture, to celebrate the Good News, to pray and to bring God and His word to the world, which he said “greatly needs his tender love and mercy”.

He thanked those who had contributed to the commemoration and made special mention of the combined churches music ministry.

Archbishop Prowse touched on the theme of God’s love in addition to giving a Catholic perspective on Justification, Scripture and Tradition.

He lamented that the Lord’s  “that they may be one” (John 17:21) commission has not been obeyed.

“The many attacks we have made on each other over the centuries are shameful,” he said.

“Yet, in more recent times remarkable movements and initiatives of reconciliation have been made between us.”

Archbishop Prowse highlighted “a veritable springtime of Lutheran-Catholic relations” since the 1999 Joint Declaration on the Doctrine of Justification.

He called for on-going renewal of all members of the Catholic and Lutherans churches.

“Let this 500th anniversary better enable us to all journey together in unity and mission in our fragile world,” he said.

He spoke about the recent Martin Luther Conference in Rome, which Pope Francis took part in, which commemorated the 500th anniversary of the Reformation.

The five imperatives found in the document From Conflict to Communion were read during the liturgy as a candle was lit simultaneously. They are:

The Five Imperatives (From Conflict to Communion)

Key dates for Lutherans and Catholics