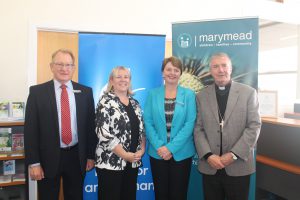 TWO Archdiocesan welfare agencies have launched a one-stop shop to provide the best service for vulnerable people in Goulburn and Young.

The side-by-side approach by CatholicCare and Marymead was launched with the official opening of the Goulburn building.

Archbishop Christopher Prowse spoke of how the agencies complemented each other and congratulated them on the outreach.

Marymead CEO Camilla Rowland said the new shared space would offer so much more for the community.

“The Goulburn office is effectively a one-stop shop providing wrap around services,” she said.

“By teaming up with CatholicCare, we are increasing our capacity to deliver services, particularly to those with more complex needs.”

CatholicCare CEO Anne Kirwan said the timing of the joint venture encapsulates their strength and commitment to supporting people in the Archdiocese.

“The vision of CatholicCare and Marymead has always been to be there for our most vulnerable in the community,” she said.

“The fact that Marymead is celebrating 50 years of service this year and we are celebrating 60 years is a true testament of our relationship with the community and their trust in us to be there for them.”

By sharing Central Business District shopfronts in Verner Street, Goulburn, and Lovell Street, Young, both organisations are confident that the united effort will make each more prominent in the community.

In a further boost, the St Vincent de Paul Society has moved next door to CatholicCare and Marymead in Young.

On June 21, Marymead will celebrate its 50th anniversary Mass and lunch.