United by their adversity and a love of football among other things, there’s not a lot separating newly ordained Missionaries of God’s Love priests Daniel Serratore and Adam Crouch.

It  was fitting they were ordained together by Bishop Pat Power at St Christopher’s Cathedral on October 7, the Feast of the Holy Rosary. 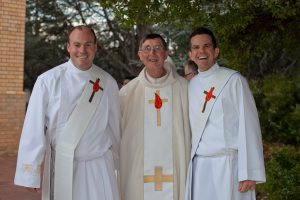 Originally from Adelaide, Fr Crouch, 36, reached ordination having survived a persistent brain tumour, while Fr Serratore 35, grew up in a largely single parent household in Sydney.

In his homily, Bishop Power reminded the pair about his own admonition and frame of mind each time he prepared to celebrate Mass.

He also encouraged them to follow the lead of Pope Francis.

“If I were asked to give one piece of advice to Daniel and Adam, it would be to be pastors in the mould of Pope Francis,” Bishop Power said.

“His simplicity of life in the manner of his patron, Francis of Assisi, his leading us all to the person of Jesus, his refusal to hang on to a privileged life, as far as he can, leaving aside the trappings of office; all these are not mere gestures, but authentic expressions of Christian discipleship.

“Pope Francis tells us to not to shy away from the smell of sheep, to be prepared to have our feet muddied, to have a genuine love for the poor and the least fortunate in our world.”

Capping off a year in which they have had six men ordained to the priesthood, MGL moderator Fr Ken Barker was delighted to see the fruits of the community’s labour once again.

“I am very proud of Adam,” he said. “He is a fair dinkum Aussie bloke who was a carpenter in Port Lincoln, and a popular Aussie rules football player, when he encountered Jesus in a new way at a Disciples of Jesus Summer School.

“When he was diagnosed with an aggressive brain tumour he was shaken but did not lose his trust in God. Through prayer he was miraculously healed.”

Fr Barker expressed his gratitude for Fr Serratore, who he met as a “young up-and-coming highly talented businessman with the world at his feet.

Unlike the rich young man in the Gospel, Daniel heeded the call of Jesus and gave up all to follow him.”