The privilege of passing on the faith

THE SPIRITUAL WORKS OF MERCY: INSTRUCT THE IGNORANT

THROUGH her involvement with the Rite of Christian Initiation of Adults (RCIA) over the past six years, Jennie McDonald has supported 41 adults as they embraced the gift of faith and journeyed to full communion with the Catholic Church through the Sacraments of Initiation.

For Jennie, the opportunity to share her faith with others is a blessing, and she feels humbled and honoured to walk alongside people who recognise the call of faith and choose to join the Church.

Jennie told Catholic Voice that her faith has always been a very important part of her life, and her desire to share this faith with others came naturally. In part, she attributes this to her upbringing.

“I am very lucky that I was raised in a Catholic family where both of my parents gave me a wonderful example of what it means to live as an active member of our parish community,” she says.

“As children and adolescents my siblings and I were encouraged to participate, not only by attending Mass, but also by helping out wherever we could. We were also encouraged to question, understand and talk about our faith.”

The RCIA process has been a part of Jennie’s life for many years, going back to her childhood when her father was part of the RCIA team at the former St Francis of Assisi Parish in the 1980s.

“I have fond memories of attending Easter Vigil celebrations and watching as adults chose to become part of our Church family,” she recalls. “This was very inspiring for me as my faith grew and developed.

“When I got married, my husband Ian said he would support me as I continued to practise my faith. At that time he wasn’t Catholic, and while he believed in a God, he didn’t have any religious connections of his own. 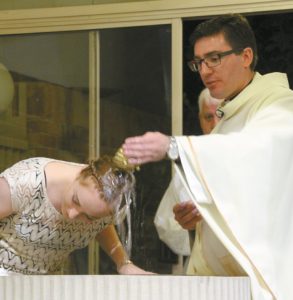 “As time passed Ian increasingly accompanied me to Mass and after 11 years of marriage, he said to me ‘I think I’m ready to do the RCIA journey’. Naturally, I was delighted”, Jennie says with a smile.

It was at this point that Jennie’s involvement with the Corpus Christi Parish RCIA team began. Jennie accompanied her husband to the first few RCIA meetings and when the assistant parish priest made an assumption that Jennie was part of the RCIA team, Jennie agreed to become involved.

“The following year, I made a spur-of-the-moment decision to continue my involvement with the RCIA. I’m sure the Holy Spirit was working in my heart – it was almost like I was being tapped on the shoulder.”

Over the past six years, Jennie has met with people who have decided to consider the possibility of becoming Catholic. Through engaging in discussion at RCIA meetings and attending Mass together, people have the opportunity to explore what it means to be Catholic, and while there is never an obligation to continue, the majority of enquirers feel called to continue the RCIA journey.

Jennie explains that some people come to the RCIA with little or no exposure to Christianity; some have attended Catholic schools and universities; and others have come to the faith through marrying a Catholic spouse. Sometimes, people baptised and raised in another Christian denomination decide to join the Catholic Church.

For Jennie, hearing each person’s story is inspiring.

“Our Christian faith is centred around Jesus Christ, who made it clear that faith is to be shared, that we should let our light shine and share the Good News with all people,” she says.