Professor: ‘Culture is destroying itself’

“SEX (has) acquired an ideological edge… removed from the creation of children”, renowned philosopher Professor John Haldane told a crowd of almost 100 at the Holy Faith Hall in Campbell on March 31, during a public lecture on the topic of ‘Sex and society’.

During his presentation, Professor Haldane spoke eloquently on the history of modern society’s obsession with sex, noting the effects of the world wars on the family.

“The legacy of [the wars] was that families were broken,” he said. “The world began to party because it had lost its hope in anything else.

“People looked in a direction to try to find something that would provide them with some kind of satisfaction and fulfilment, and I think sex began to take on that role in people’s lives.”

The ensuing fatalism that crept into Western society with the threat of nuclear annihilation, combined with the advent of contraception, societal acceptance of abortion, and the introduction of no-fault divorce had further detrimental effects.

“All of these combined to focus the culture’s attention on sex… sex began to become casualised, it’s taken outside of the context of marriage and the expectation of children, and that has just proceeded relentlessly,” Professor Haldane said. 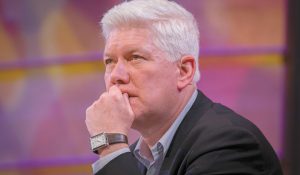 Professor John Haldane spoke on the topic of ‘Sex and society’ recently in Canberra, where he discussed the problems arising from a cultural preoccupation with sex. PHOTO: ONLINE

“Moreover, it’s acquired an ideological edge as well, because now people for whom in an earlier age the quest for significance in their lives might have been the quest for religious meaning or some other kind of existential meaning, becomes set aside as a quest just for sexual fulfilment.”

Professor Haldane noted a “sexual schizophrenia” in society, where paedophilia is held to be severely distasteful yet the sexualisation of children, particularly girls, in advertising and entertainment, is accepted.

“The whole pornography industry is seeking to drive down the age at which they can depict people explicitly in sexual activity, and parents are sexualising their own children, and at the same time condemning people who have a sexual interest in children. I think this is schizophrenia,” he said.

“The reason we are so condemnatory of paedophilia is it’s the one area in which it’s still possible to make ethical judgements about sexuality. In every other sphere we’ve entered into the age of no judgement, there’s nothing you can say in criticism of people’s sexual practices and interests.

“The one area that’s left is paedophilia and I think that’s a manifestation of bad cultural conscience, we have a lot of guilt and uncertainty about what we’re doing sexually and so we need a scapegoat and the paedophile emerges as the guilty party.

“But notice that at the very same time we condemn somebody for their sexual interest in children… we’re also producing all of this imagery, which is sexualising those very children”.

Professor Haldane discussed the international lobby movements for polyamory and polygamy and on the Genetic Sexual Attraction movement, noting that these are logically coherent outcomes of a perverse understanding of marriage, which started with no-fault divorce.

“Once you’ve departed from a certain conception of marriage and the family, a conception that sees the function of marriage existing as a social institution for the sake of the creation of children… there’s no good principled ground on which to resist these other innovations,” he said.

“I think they’re coming, I don’t think there’s any doubt about that. People in this room today will live to see polyamorous and sibling marriage.”

Professor Haldane also made particular note of what he sees as the increasing eroticism, sentimentalism and consumerism in affluent Western societies that have changed how we think about personal relationships.

He described the movements to change the meaning of marriage as “bourgeois consumerism parading under the vanity of being radical thought”.

When asked about his hope for the future, Professor Haldane said “the seeds of its own destruction are contained within it… it’s going to get worse before it gets better”.

“I think this culture is destroying itself, from the children up. The people who are the greatest victim of all of this are children,” he added.

Professor Haldane is in Australia due to his appointment to a Visiting Professorship at The University of Notre Dame Australia. He is teaching a 13-week unit on the ‘The Good Society, its Nature and Foundations’ within the School of Philosophy and Theology.

Professor Haldane will deliver a public lecture in Sydney on May 12 on the subject ‘The challenge of barbarianism and how to deal with it’. For more information, visit www.nd.edu.au/haldane.