the relief of suffering in timor-leste 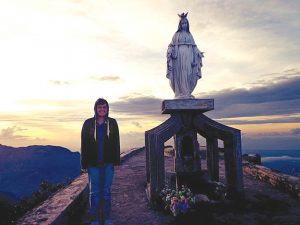 From my office window, it is hard to believe that I was shivering in Canberra just a week ago. Here in the village of Tibar in Timor-Leste, palm wine is for sale under little palm thatched shelters across the road; pigs, goats and water buffalo stroll into the compound, and the road is busy with pick-up trucks full of young people going to Dili and motorbikes laden with vegetables or fresh fish strung on poles across the driver’s shoulders. It is hot and humid and my diet has been one of rice, fish, greens and more rice.

I have returned to Timor for a few weeks to volunteer at Klibur Domin, a local healthcare NGO where I worked for a year in 2013. Klibur Domin has three main programs: 1) Inpatient care for low dependency patients from Dili hospital; 2) Tuberculosis detection and treatment including a community-based TB program and Timor’s only facility for the treatment of multi-drug-resistant TB patients; and 3) a Community-based rehabilitation  program which provides therapy, assistive devices, social assistance and advocacy for persons with disabilities.

Ryder-Cheshire continues the humanitarian works of Baroness Susan Ryder of Warsaw (1924-2000) and Group Captain Leonard Cheshire, VC (1917-1992), both incredible individuals who after their distinguished careers during World War II were committed to relieving the suffering of others worldwide. Both Leonard Cheshire and Susan Ryder were converts to Catholicism and married in 1959. Due to their efforts there are more than 400 homes in over 50 countries today.

The president of Ryder-Cheshire Australia, Air Commodore Peter Newton, AO RAAF (Retd), notes that Ryder-Cheshire is “a small charity run entirely by dedicated volunteers, with no offices or expensive overheads. We guarantee to get every dollar donated to Ryder-Cheshire to the homes we support”.

Many Australian volunteers have assisted at Klibur Domin and other Ryder-Cheshire homes over the years, including several from Canberra.

I am proud to be a small part of this organisation committed to providing for the healthcare needs of disadvantaged communities both in Australia and further afield.

For more information about Ryder-Cheshire Australia, volunteering opportunities or to donate, please visit www.ryder-cheshire.org. Your support is very much appreciated. As they say in Timor “Obrigado barak, no Maromak haraik bensaun ba imi /Thank you very much, and may God bless you”.