FOUR seminarians for the Archdiocese of Canberra and Goulburn will return to the Seminary of the Good Shepherd in Homebush, NSW for the beginning of another year of studies.

Joshua Scott and Namora Anderson will commence their seventh year in the seminary, while Alex Osborne will begin his sixth year.

The trio will be joined by Eden Langlands, who will be the Archdiocese’s first new seminarian since 2011.

The 21-year-old was introduced briefly to parishioners of St Christopher’s Cathedral on December 20, when fellow seminarian Namora Anderson was admitted to candidacy by Archbishop Christopher Prowse.

Namora told Catholic Voice he was excited to be able to make his intentions to become a priest public.

“Being accepted by the Archbishop affirms me in my path to become a priest,” he said. “It is a big step. It is a foreshadowing of ordination so it is a preparation of sorts for the promises that are made at diaconate ordination.

“It was so inspiring for me to see the smiles in the congregation that make me more encouraged to keep strong and invigorated me with a greater sense of peaceful joy.”

Prior to Christmas, Namora completed a pastoral placement at Young Parish, before returning home to Queanbeyan for the remainder of the seminary holidays. 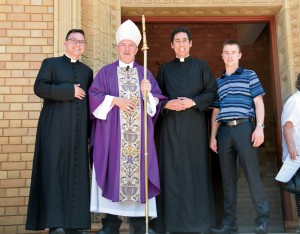 “It was great to be inspired by the enthusiasm of a young priest (Fr Paul Nulley) who works hard for the care of souls,” Namora said.

“Fr Tom Thornton was a great mentor. He is a man of great understanding of what the priest is and does, which comes out of a deep prayerfulness and an attuned ear listening to people.”

Joshua Scott, who was admitted to candidacy last June, completed his placement at Corpus Christi Parish in South Tuggeranong, and said it was a wonderful experience.

“Being placed with three great priests who mentored me in the day-to-day living and ministry of parish life and having the opportunity to serve alongside a wonderful parish team was encouraging and affirming,” he said.

“It was a great encouragement to be in such a vibrant, welcoming parish, and in such an environment I learnt a lot.”

One of Joshua’s main tasks in the past year was to redevelop the seminary’s website (www.sgs.org. au), a project that took about nine months to complete.

“It’s fresh, it’s colourful, it reflects things new and old, but it also shows the reality of seminary life,” he explained.

“It shows who we are and it demystifies the seminary, that’s probably the biggest thing this new website does.”

Fellow seminarian Alex Osborne says he’s looking forward to returning to the seminary for what will be his sixth year of studies.

During December, Alex took part in a pastoral placement in Bateman’s Bay and Moruya with Fr John Armstrong and Fr Dominic Byrne. “I was in charge of running the second rite of Reconciliation at both churches, which was my first time organising a major liturgical event,” he said.

“I was a bit worried but after some practice everything turned out well.”