THIS year’s Catholic Social Justice Statement has the potential to be a catalyst for a more just and humane response to asylum seekers, Sr Jane Keogh CSB told those gathered at a public forum to discuss the statement on November 11.

“I believe this statement, and particularly the process of taking it to the people, is one of the most encouraging things to happen in the Church lately,” she said.

“This statement is strong. It speaks directly against current policies and practices.

“It is encouraging and practical, and it points a way forward. It gives direction for personal, local, national and international responses.” 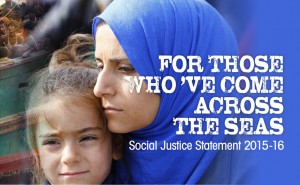 During her presentation, Sr Jane spoke about practical ways individuals and communities could help those in need.

“In June 2014, 800,000 asylum seekers fled ISIL and invaded the capital of Kurdistan, a city no larger than Canberra,” she said.

“The Christians in the capital of Kurdistan opened their doors and their hearts. They set them up in churches and halls. The whole population made sacrifices but they did what a follower of Jesus would do in their circumstances.”

Mr Stanhope spoke about the negative consequences of mandatory detention and off-shore processing, challenging politicians to take an humane policy to the next election.

Mr Machiridza, who came to Australia in 2010 as an asylum seeker from Zimbabwe, recalled the dire situation he faced as an underground journalist under the Zimbabwean dictatorship. Four years later, his family were able to join him, although not without great difficulty.

“I am living testimony that if someone who is broken and has no hope is well supported and received and is assisted on the way, they can do so much to give back to the community that nurtured them,” Mr Machiridza said.

The forum concluded with an invitation to all to participate in the ‘Kitchen Table Conversations’ on the statement (contact csjc@cg. catholic.org.au) and in the Archdiocese’s Parish Refugee Support Project (contact refugee@cg.org.au).