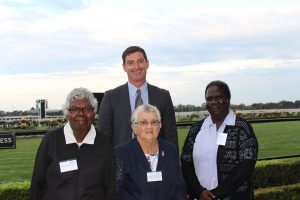 AUSTRALIAN Catholic University has bestowed their highest honour on Sister Anne Gardiner fdnsc AM, recently awarding her an honorary doctorate at a ceremony in Sydney.

Apart from six years of teaching in Nauru and four in Darwin, Sister Anne has wholeheartedly devoted her life to teaching at the Tiwi Catholic mission on Bathurst Island for more than five decades. Now 86 years old, she continues to live on Bathurst Island, where she has supported Tiwi culture and heritage, enriched the community and contributed to the education of multiple generations.

ACU Vice-Chancellor and President Professor Greg Craven said she characterised the values of the Church and of ACU’s Mission.

“At the core of the Catholic faith is love, compassion, charity, and empathy. It would be difficult to go past Sister Anne for a greater example of these qualities.

“Sister Anne has driven the pursuit of the Catholic Intellectual tradition by advocating the importance of education as a right for the Tiwi people, always in the spirt of openness and dialogue and always searching for the Truth in Love in advancement of the common good.”