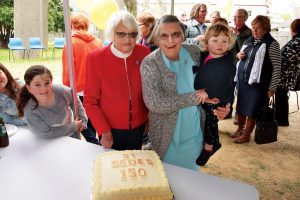 Originally part of the Archdiocese of Sydney, the parish of Braidwood came together to celebrate 150 years since their gothic stone church was completed in 1866.

Parishioners organised the celebrations and before Mass Br Berg delivered a concise history of the parish.

The church is thought to be named after pioneer Bishop John Bede Polding and is a product of the hard-working miners in the district from the mid 1800s.

Fr Peter Day celebrated Mass on the day, assisted by Fr Laurie Bent, who has served the parish from Goulburn.

In his homily, Fr Day pondered what the future held for the Church. “So what of the next 150 years?” he asked the congregation. 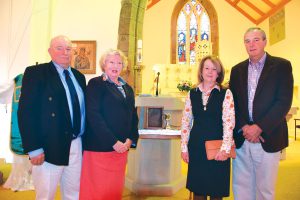 Top: Norma Flack and Dawn Jonas had the honour of cutting the cake. Above: Long-time parishioners James and Mandy O’Brien and Barry and Germaine Hannaford. Pictures: John McLaurin.

Fr Day spoke of tradition as a “living thing” and recommended that as a church we “go back to the poor and marginalised,” by “walking alongside people in their vulnerability”.

Staff and students from St Bede’s Primary were involved in the celebration, while a display with all the church’s paraphernalia was on show, including a vast array of priest’s vestments and procession banners. The parish history book ‘The House of Prayer’ written by Robert Parkinson was on sale.

James is a descendant of the family of Fr Edward O’Brien, Braidwood’s first resident priest, while Barry is a descendant of Richard Hannaford, the builder of the church. James brought in Fr O’Brien’s 150-year-old Mass kit for display.

The kit consisted of a wooden box and all the vessels were intact, so much so, that the specially engraved chalice was used at the Mass. In the wooden box was a pyx with unconsecrated wafers from the earliest days of Catholicism in Braidwood.

Local legend also has it that the Mass kit box had a bullet go through it from an encounter with bushrangers during the gold rush.

For those who want to learn more about the parish history, copies of the parish book are available from Br Berg on (02) 4842 2444.