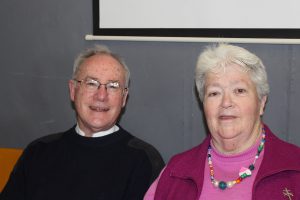 Original story published by the Goulburn Post on October 24.

A capacity crowd attended the farewell afternoon tea of Sr Bernadette Mary (Walsh), such was the popularity of the Josephite Sister in and around Taralga.

In the seven years since she came to Taralga, Sr Bernadette Mary has involved herself in anything from the town’s art show to kids club, garden club, the schools and judging the Christmas lights competition.

She was also a guest speaker at Anzac Day and gave her support to the football team.

David Croke spoke on the influence Sr Bernadette Mary had in the community, describing her as “a woman of strong opinions” and someone they would keep in their minds and prayers.

Goulburn Mission Parish Priest Fr Dermid McDermott said it was both a “sad and happy day” and that she had made “a big difference to the community”.

Anglican Minister Rev Sally-Ann Hart said she had heard about Sr Bernadette Mary before meeting her and that they would go on to become “firm friends”.

Carla Calleja thanked her for being such a good friend to the school, while Tom Hand acknowledged the support she gave the local football team.

Brian Moloney wished Sr Bernadette Mary well for the future, and Prue Burfitt spoke on how she will be missed.

The Josephite Sister thanked Fr McDermott and Taralga’s Christ the King Parish, saying “it was a great honour to see all those present at her farewell”.

In the days following her departure from Taralga, Sr Bernadette Mary moved into her new home at the St Joseph Convent apartments in Goulburn.