Things looking up but Raiders not out of the woods 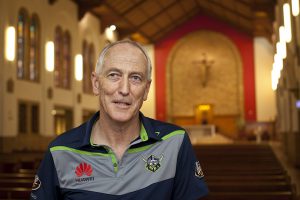 YOU could forgive St Christopher’s Cathedral Administrator Mgr John Woods for thinking he had the Midas touch when it came to the Canberra Raiders in the late 1980s and the early 1990s.

Having returned to the Archdiocese in 1985 after spending two years studying Canon Law in Canada, he took on the Raiders chaplaincy in 1986 as their second chaplain since they first played in the then NSWRL competition in 1982.

“There was no handbook when I started,” he said.

“In the early days I regularly joined in some of the training, or I would run laps around Seiffert Oval and later out at GIO Stadium where I would also have a chat with the players and staff from time to time.

“Now I try to attend part of a training session each week and get to the home games.

“Being present and involved, you build credibility and from that more personal encounters can follow.

“I have only ever received a friendly welcome from the players, coaches and support and office staff.”

In 1987, the “Green Machine” played in their first grand final, going down to Manly.

In 1988 they lost to Canterbury in the final 45 seconds of the preliminary final.

“If it hadn’t been for the preliminary final in 1988 where we lost to the Bulldogs in the last seconds of the match, then we (the Raiders) would’ve played in five consecutive grand finals.

“And at that stage I thought I must’ve been going alright at this chaplaincy caper.”

Having been to the top of the mountain, a number of years in the wilderness followed with intermittent finals appearances before last season when the Raiders evoked their glory days, winning 17 home and away matches before bailing out in the preliminary final to Melbourne Storm.

The Raiders renewed success brought a smile to many people, none more so than Mgr Woods.

A proud Canberran, he has been with the club through thick and thin, late last year notching up 30 years as chaplain.

“In the past and to some extent still, there has been a bit of a stigma associated with Canberra,” he said.

“Too cold, too many public servants, too many roundabouts and so on. Yet most who have come to Canberra from all over grow to love living here.

“But winning those premierships, I believe, really galvanised the city and proved that we could be a force to be reckoned with on the national stage.

“It’s good to have the Raiders back up where they belong somewhere near the top.”

Mgr Woods says being a chaplain to some of the nation’s and world’s best rugby league players is one of the more enjoyable parts of his ministry.

Mixing it with names like Mal Meninga, Laurie Daley, Ricky Stuart and Bradley Clyde, he has had a front row view of what goes on behind the scenes to produce a world-class unit.

He also keeps a keen eye on the lesser lights at the club.

“I get a particular enjoyment in seeing a Canberra, Queanbeyan or boy from the bush make the grade,” he said.

Mgr Woods is aware of some of the more personal aspects of players’ lives. He says some are great role models on and off the field, but thinks they largely cop a bad rap in the media.

“The media tend to be all over any negative behaviour and yet much good is done by individual players and through club-supported initiatives,” he said.

“All NRL clubs are trying to build a culture which makes them appealing on the field and in the community.

“Coach Ricky Stuart is big on creating a culture that respects the past, but is he is also about making history. The players know that he backs them and they very much respect his football knowledge and passion.

“While playing NRL is the aspiration for all who come to the club, many players won’t make it and that can be a humbling experience. I take my hat off to them for their commitment.

“The vast majority will draw on lessons learned to forge careers and foster personal relationships. Sport is a gateway into the something more of what it is to be human.”

Mgr Woods spent part of his sabbatical last year attending two sports conferences, one in York, England, and the other at the Vatican.

At the conclusion of the latter, he presented a Raiders jumper to Cardinal Ravasi for Pope Francis.

“No doubt the Holy Father will be cheering for the ‘Green Machine’!” he said.

Former Brisbane, Gold Coast and South Sydney big man Dave Taylor has also been training with the club in the hope of securing a green jersey.

This year expectations will be high for the Raiders because they won’t be afforded the surprise packet tag that accompanied them last year when they went within a whisker of playing in a grand final.

They went down to Melbourne Storm in the preliminary final, but regardless of how they fare in 2017, one thing is sure that they’ll have Mgr Woods backing them.