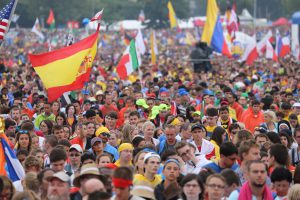 Let me introduce you to the most popular activities occurring around the globe. I’m putting World Youth Day and Pokémon Go in the arena to discover the issues, successes and similarities of these influential experiences.

World Youth Day is a gathering of young Catholics that began under the leadership of Pope John Paul II in 1986. JPII wanted young people to come together, be encouraged, and celebrate what they’re passionate about – Jesus. This year, WYD takes place in Krakow, Poland from July 25 to 31. Estimations say two to three million will attend the final Mass with the Pope.

Pokémon Go, was released earlier this year and has been downloaded 15 million times in the USA. The game invites all ‘trainers’ to hunt down and catch wild Pokémon popping up throughout the city using the camera and GPS tracking system on their smartphone. Pokémon players display signs of intense screen staring, oblivious walking, some carry spare battery packs and serious contenders look like they’re from Lord of the Rings. If you want to see them travel in packs, visit a university.

Critics laugh that Pokémon Go did what Fitbit failed to do. Players are complaining of sore feet and blisters from ‘accidentally’ walking 20km. American animal shelters are seizing the moment by getting Pokémon catchers to take homeless dogs with them while they hunt. This is a major strength – emptying loungerooms and encouraging movement.

WYD is all about the walking. Pilgrims are warned about a possible 15km walk each day. Transport problems are inevitable and where you may normally call an Uber, WYD will put you among thousands of pilgrims who didn’t fit on the train carriage, marching and chanting through the city to your destination. (Perfect time for Pokémon Go! Except you don’t have wifi or battery by this point).

You may be able to name the 700-odd Pokémon and win the 90’s Pokémon games, but these legendary skills won’t help you here. A simple start-up tutorial is all that is given to get going, and many players have found Pokémon Go hard to navigate.

WYD leaders prepare exhaustively for the safety and wellbeing of their group, including learning to say “bathroom” in relevant languages. However nothing can prepare you for the wild ride of a 3-million-person Mass.

Those who have experienced the pilgrimage will attest that it’s about jumping into the chaos and enjoying the ride.

Yes, Pokémon Go got people out of the house, but they’re staring at screens and disconnected from reality. Last week I had to slam on my breaks to avoid hitting a group catching a monster on the road. Four players recently had to be rescued from a cave that they wandered into during the game, and a Pokémon related fatality has been reported.

Overall, it seems basic rules about privacy and using your brain have been forgotten.

WYD has difficulties due to the nature of the crowd size. Sometimes, the food line takes hours or meals run out. The toilets can be blocked for kilometres and telecommunication systems fail under pressure. It’s part of the pilgrimage that things get uncomfortable, but it enriches the week with humour and humility.

WYD means little sleep, sore muscles, bad weather, and more anxiety, but it is worth it for what is gained.

Here’s where our two experiences differ. Pokémon Go is exciting and nostalgic, but not fulfilling. The catchphrase ‘Gotta catch em all’ spurs on the insatiable drive. I don’t hate the game (it brings lots of joy), but if you’re looking for an experience that has a positive or satisfying effect on who you are, it’s not this.

WYD is responsible for the change of millions of hearts around the globe. People have the chance to meet and experience the realness of Jesus. They receive hope, a sense of strength and most unshakably, an idea of the bigness of God.

Let WYD give you hope that the Church is alive and well (keep up with our pilgrims at bit.ly/cgwyd16).

If you’re an avid Pokémon player, just remember what your Mum told you – look both ways before crossing the street. Literally.