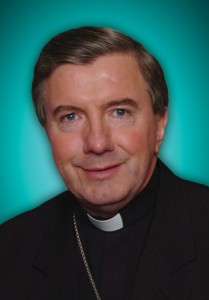 When Archbishop Christopher Prowse speaks about his childhood, he recalls his parents chatting, joking and even having arguments.  His was a normal family upbringing, just like the rest of us.

But while he heard harsh words exchanged between Mum and Dad, he also heard and saw them make up.

“I remember Mum and Dad had arguments, even though they tried to conceal them,” Archbishop Prowse recalls.

“We could hear harsh words, but I also saw them reconciling.  I have a distinct recollection of Dad kissing Mum, which I was always delighted to see, so we knew that, despite a lot of fights and difficulties, there was evidence of reconciliation.  Their marriage had its ups and downs, but they worked as a team.”

Melbourne-born Archbishop Prowse turned 60 on November 14 last year, just four days before he was installed as the new Archbishop of Canberra and Goulburn.  Previously he was Bishop of Sale in country Victoria.

While his CV lists a doctorate in moral theology from Rome and a string of church appointments, the gentle-voiced Bishop is more than happy to be introduced through the prism of his family upbringing, which has shaped him considerably.

It was a middle-class upbringing in Melbourne’s eastern suburbs, with Dad Frank, Mum Marian, older sister Julianne, older brother Stephen and three younger sisters, Lisa, Sandra and Deborah, not to mention a mix of dogs, canaries and guinea pigs.

The lessons he learned growing up include the importance of loyalty, faithfulness to each other and to God, the value of hard work and to keep a spirit of fun and humour.

“Our family is no different to any other and we’ve had our challenges,” he says. “One of my sisters didn’t have much luck in the marital stakes and her marriage broke up, but apart from that, the others all have intact marriages.

“I don’t see my family enough and often feel guilty about that.  I’m on the move a fair bit and not particularly reliable, although I do try to be.  You get lost in your own world.  On birthdays we always make contact and the Saturday before Christmas Day we have a family reunion.

“Every family has its challenges, but they seem more acute today, more fraught with danger.  There are mental health issues, addictions of one sort or another and playing out what the world thinks is important when, a generation ago, the world followed the family’s lead.

“Families can’t put a wall around the world, and a lot of changes have been positive, but a lot is very negative and can be extremely detrimental.

“The context of family life has changed dramatically which has made it difficult for them to come together.  We lead such frenetic lives and there is an expectation that we all must be so busy.  Family time has to be scheduled.  It’s almost a counterfeit way of being family – many families are now ‘online’ families who connect like ships passing in the night.

“The challenge for parents is to be reflective and set goals and priorities for their family lives.”