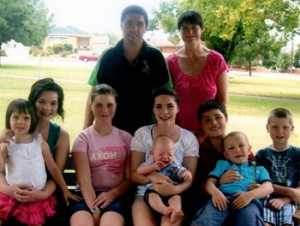 Cathy and Julian Drumore are “The Alphabet Family”; their eight children are named after the first eight letters of the alphabet.

“I am the eldest of nine children and when my parents got to their sixth son they named him after a man who worked for my Dad,” Cathy, 40, says.

“I thought if we limited ourselves to one letter of the alphabet it would be easier to decide on names.

“I probably thought Julian and I would finish at six, but we are so glad to have Guinevere.  Harvey was a real surprise but we are happy with what God gives us. Who knows, we might have more!”

It is not only the ‘alphabet names’ that makes this family different.  Their surname, Drumore, is one Cathy and Julian made up, by merging their surnames of Drum and Moore.

“I was quite the feminist when I got married and thought it was pretty unfair that women had to change their name, but then I also didn’t want a hyphenated surname,” Cathy explains.

Cathy, who grew up in a small town near Temora, about one hour from Wagga Wagga, met Canberra-born Julian at the University of Canberra. They played cards together and got married at 21.

They moved to Temora after their fourth child, Dominic, was born.

“Mum and Dad weren’t far away and we needed babysitters,” Cathy says.

High school teacher Cathy has always been the main breadwinner while Julian has been the stay-at-home Dad. Today, she teaches English and Maths at Ariah Park Central School, while Julian cares for little Guinevere and also runs a computer repair business from home.

Despite their busy life, the couple often watch movies together after the children have gone to bed, and do manage the odd date now and then.

“Julian plays a lot of sport and recently came home saying his mates had asked him to the local cinema for a movie,” Cathy says. “He said, ‘I told them I’d join them, but only if you come with me’.  So that was a night out for us!”