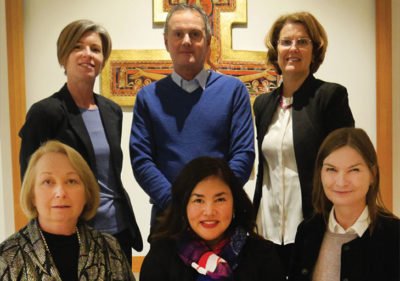 The Advisory Panel was established by Archbishop Christopher to provide advice to him and the Institute for Professional Standards and Safeguarding (IPSS) Manager, Maria Hicks regarding professional standards and safeguarding.

The formation of this Advisory Panel furthers the Archbishop’s commitment to implementing Child Safeguarding Standards within the Archdiocese and as recommended by the Royal Commission.

Angela McCabe is a consultant psychologist in private practice. She has held a range of executive and clinical roles, applying behavioural science principles to design, implement and evaluate a range of clinical, forensic and organisational programs, for Government, the United Nations and NGOs. She has a special interest in mental health support, risk management and organizational transition, including the prevention of/or recovery from, betrayal of trust behaviours and traumatic injury.

Liesl Centenera is a consultant with her own business specialising in governance, policy and human resources matters. She holds a Degree in Econiomics and Law and is admitted to practice in the ACT Supreme Court. Liesl currently has appointments as Chair, Bosom Buddies Management Committee; Chair, Music for Canberra Board; and Deputy Chair, Territory Records Advisory Committee. She is also the current Chair of the Sts Peter and Paul School Community Council.

Kim Linsell joined CatholicCare in January 1995 as a Student & Family Counsellor. After working for a number of years in both primary and high schools, Kim moved into management, overseeing both the school counselling and family relationship counselling programs. She was later appointed as Director Counselling Services, which has since expanded to also include therapy services. Kim has previously worked in Community Health as a social worker, the Disability sector, providing support to individuals and families, as well as in child protection in South Africa. Kim is a long term member of the Australian Association of Social Workers and has a Masters degree in Human Services.

Shayne Aitken is a highly experienced and well qualified child protection manager. He spent twenty years as Detective with the NSW Police Force with over five of those years attached to the Newcastle Joint Investigation Response Team, a team responsible for investigating serious offences against children. He worked for several years as the Senior Officer Student Wellbeing & Safeguarding with Catholic Education Canberra Goulburn before commencing his current position as Manager of Child Protection including investigations with a large non-government Out of Home Care Provider. Shayne holds a Bachelor of Policing, an Advance Diploma of Public Safety and has also undertaken training in therapeutic crisis intervention

Mary-Louise Rentoule is a parishioner of St Mary's Parish in Young, NSW. She is a practising lawyer of some 22 years with significant experience in complex child and parenting matters within the family law jurisdiction. Mary-Louise previously provided legal advice to often disadvantaged members of the community through her service as a member of the Family Law Legal Aid Panel for over ten years. She has previously worked as a district officer with the then NSW Department of Community Services in the area of child protection. Apart from a law degree and a Graduate Diploma in legal practice, Mary-Louise also holds a Bachelor of Social Science (majoring in counselling and mediation) having volunteered as a Lifeline Counsellor for a number of years. Prior to that she graduated with Distinction in her studies in the area of Aboriginal Health and Community Development.

Fr Richard Thompson entered St Patrick’s Seminary at Manly in Sydney in 1980 and was ordained at Temora in 1985 for the Archdiocese of Canberra and Goulburn. He was appointed to Young as Assistant Priest and then to Canberra as Principal Hospital Chaplain. In 1988 he joined the Royal Australian Naval Reserve as Chaplain then transferred to fulltime chaplaincy in 1999. Fr Richard entered the Archdiocese of Canberra and Goulburn in 2005. In February 2016 the Archbishop Christopher Prowse appointed Fr Richard as Dean of the Central or (Canberra) Deanery with the title Vicar Forane (VF).

The Terms of Reference for this panel can be found in the following link https://cgcatholic.org.au/download/18675/

Further information on the National Catholic Safeguarding Standards can be found at the following link: https://cgcatholic.org.au/professional-standards/cpsl/